the A38 into Bristol, or north onto the M5 for Gloucester /

This will clearly get much worse if Thornbury expands into a

“commuter town”, let alone adding a new settlement in the form of

Saturday, in Summer, as vehicles try to escape the M5 on their way 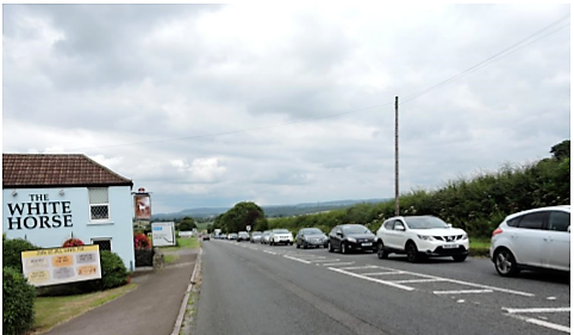 With so much more planned house building, and even more threatening, where will the

This is the A38 with the seasonal queues which build up at almost all holiday weekends,

starting as early as a Thursday evening, restarting on Friday afternoons from as early as

2pm, and then on Saturday mornings regularly from 10 or 11am, until mid afternoon. This

is all traffic from further north getting held up due to sheer quantity on the motorway,

and if there is an accident anywhere between J14 and J25 south of Bridgewater, there is

Bristol, Portishead and beyond. In addition, the A38 carries huge amounts of heavy

Can a new village be built either side of this?

The only way out of Thornbury and its immediate surrounding area is via the A38, M5 if

you can reach it, and the narrow village lanes which are mostly single track. Not many

people want to go north on the A38 nor M5 towards Gloucester.
​