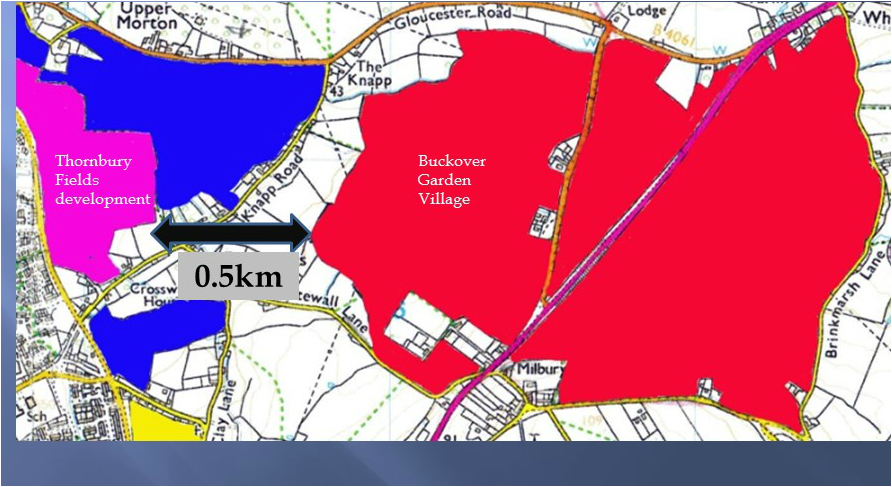 How close is this from Thornbury?
Alarmed at the prospect of South Glos Council teaming up with BGV to apply for Government funding, TRAPP'D wrote to the Dept for Communities and Local Govt to explain why we thought they should not get it.

I am writing on behalf of TRAPP’D (Thornbury Residents Against Poorly Planned Development), an action group that wants to see housing development appropriate to the needs of Thornbury, preserving the character and community of Thornbury as an historic market town. We are not affiliated to any political party.

We have recently learned that South Gloucestershire Council (SGC) has supported an Expression of Interest (EoI) that seeks funding for the development phase for a garden village on the outskirts of Thornbury. We strongly urge you to decline this application on the following grounds:

1.       This is not a locally led proposal, and does not have community support

The application is deceitful in claiming that it is a locally-led proposal. The word “local” is mentioned 51 times in the EoI, and the reader could be forgiven for thinking it is supported locally by the community, but in reality nothing could be further from the truth.

The proposal is led by Tortworth Estate, a wealthy land-owning company that is seeking to cash in on the opportunity, and appears to be supported by SGC, but is universally opposed at local levels. Thornbury Town Council has expressed its strong opposition to this development, and a local petition entitled “Enough is Enough” is gathering momentum. At the time of the EoI submission in July of this year no plans were available (except on Tortworth’s website) and there was little awareness amongst the general population. Since then there has been a growing local realisation of the sheer scale of proposed developments in and around the town (of which this is by far the largest) and this has led to the formation of our action group in the last month.

A claim is made is the EoI in section 2 that the emerging concept has been well received by the local media. This is simply not true; more typical is the headline in the front page of this week’s local newspaper, the Thornbury Gazette, which says “Fight over ‘poorly planned’ houses”, and in its editorial the paper says “with more than 1,500 homes on the horizon for the town, as well as 3,000 proposed for a new village on the outskirts, the town has been under threat for some time”.

2.       This proposal is a development that uses ‘garden’ as a convenient label

This is an opportunist venture by Tortworth Estate, and the footprint is determined by the location of a large segment of their land at the northern end of Thornbury that falls in an area targeted by Developers. The reason this area is targeted is that Greenbelt protection to the north of Bristol happens to cut off half way through Thornbury, hence any land at the northern end of the town is as close as developers can get north of Bristol (and for commuter train services at Bristol Parkway) without having to seek planning permission on greenbelt land. We believe that his proposal would become a dormitory suburb of Thornbury.

The DCLG guidance for the Garden Village concept says that it must be a freestanding settlement, not an extension of an existing town or village. From the map in the EoI summary you can see that this proposal comes to within 450 metres of existing housing commitments, less than a third of the diameter of the proposed development. The EoI studiously avoids talking about the proximity of Thornbury, and maintains a flimsy pretence of being a separate and freestanding development.

What is played down in the EoI is that the A38 runs straight through the middle of this proposal. This is an extremely busy road, running to 3 lanes for most of the development, and we find it impossible to imagine how a “village” can straddle such a highway. Either this would be two settlements cut in half by the main road, or else it would have to have severe traffic calming measures in place. However, in the morning rush hour the south bound traffic heading towards Bristol and the train stations is already horrendous and the subject of much complaint in the town. In addition, on Friday evenings and all day on Saturdays in summer there is already a permanent queue of south bound vehicles caused by people trying to avoid congestion on the M5. This stand-still stretches from the middle of the proposed development for 1.5 miles to a set of traffic lights to the south. We dread to think what this would become like with vehicles from another 3,000 houses seeking access to this road.

The land itself is agricultural land designated as Grade 3 BMV (Best and Most Versatile), the loss of which is supposed to be minimised by planning protocols.

3.       SGC has behaved undemocratically and in a manner that pre-empts due process

Thornbury Town Council wrote to you on 24th August to say that the EoI had been submitted without discussion or correspondence with any of the elected representatives of the area or the Town or Parish Councils impacted by this proposal.

We believe the reason SGC did this was because they were following their own agenda in terms of county wide housing development numbers, and knew how unpopular this proposal would be at local level. The mayor of Thornbury presented a letter to SGC less than two months prior to the EoI (also prior to learning about the Buckover scheme) expressing concern about speculative development in the area and asking that SGC refuses further planning permissions on edge of town green field sites for the time-being. SGC clearly knew that the Buckover proposal was on the cards at the time, and we believed they behaved disingenuously and without regard for local democracy or opinion.

The language that SGC uses in support of the EoI demonstrates that they have no intention of applying any objective or impartial scrutiny to this proposal when it comes to the Planning Approval stage. Phrases such as “exciting prospect”, “fully endorsed by the Council”, “we look forward to working further with the promoters”, “Council fully supports the commitment” indicate to us that no notice will be taken of any local concern, and that they abdicate their fiduciary duty of care to the town.
We believe this partisan and duplicitous behaviour potentially leaves SGC open to legal action if this proposal ever gets past the Planning stage.

4.       Government funding is not needed to develop this proposal

As a matter of principle, we believe that risk and reward should go together. Tortworth Estate aims to make a lot of money out of this development and they should have to bear the financial risk of making the case for it.

We fully understand that circumstances arise where the sponsoring entity does not have the financial resource to bring a potentially good proposal to the point of seeking planning approval. However, that is not the case here - Tortworth Estate is owned by the 7th Earl of Ducie (David Moreton) and his family. Tortworth is now a private unlimited company, which is rare but usually occurs when a company values secrecy over the protection of limited liability because it avoids having to file annual accounts. The last filed accounts in 1998 show a profit before tax of £431,377. Furthermore, you will notice from the fatuous hyperbole in the EoI that Tortworth has engaged expensive planning consultants in the form of Hunter Page Planning, demonstrating no shortage of funds for Tortworth to pursue their aims.

Suffice it to say we believe that the taxpayer should not subsidise Tortworth Estate’s opportunist venture.

Further, we suspect that seeking funding may not be the primary motive here. The Achilles heel in this proposal is that it is a big housing estate masquerading as a Garden Village. Tortworth and SGC are desperately keen to for you to validate their claim to be a Garden Village by agreeing to participate in some way. We believe that you must be clear in your own minds that this proposal unambiguously meets the criteria required for a Garden Village, and we are very confident we have demonstrated that it does not.

We hope that there will be many worthy bids for funding for Garden Village initiatives up and down the country, and indeed we would welcome an appropriately situated one in the region. When it comes to allocating taxpayer’s resources we believe that we have shown that the Buckover EoI neither requires nor deserves such support. We therefore strongly urge that you turn down this EoI.

If you have any queries about any of the points made, or wish to know more about the level of support locally for our campaign for better planning for our town, then please do not hesitate to contact us.

For, and on behalf of, TRAPPD
​